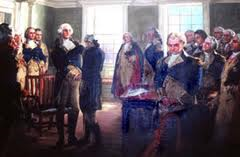 In Chapter 31 of The New Founders, only days before the election candidate Frank Walters (George Washington) brings his new founders to Fraunces Tavern in downtown Manhattan, the very site he bid his emotional farewell to his trusted officers in 1783 after the Revolutionary War.

Pepper set up a private dinner meeting at Fraunces Tavern in downtown Manhattan at Walters’ request. The media was not alerted to the event and Ken Rader did not mention the dinner in his daily press briefing. Walters and Pepper arrived in a normal yellow cab as to not draw attention. The historical significance of Fraunces Tavern was not lost on the new founders. As the limo entered the tunnel, Hahn mentioned that he was a regular there since he began working downtown. He described the history of the restaurant from its establishment as the Queen’s Head Tavern to its presence as the site of the Sons of Liberty Tea Party meetings. Hahn said it got its name from its founder, Samuel Fraunces, a free black man born in the West Indies and personal friend of none other than George Washington.

Hahn’s tone turned serious when he described in intimate detail the 1975 terrorist bombing at Fraunces that killed four and injured scores of others. He explained that most of his generation unfortunately knew the building as a watering hole instead of an edifice of historical merit. Hahn finished by informing the men that his friend who lost his life on 9/11 in the World Trade Center, first lost his godfather to the lunchtime terrorist act at Fraunces Tavern. He noted with considerable disgust that for cheap politics, a former president granted clemency to the terrorists without them repenting or requesting the pardons.

“Alexander Hamilton wrote in The Federalist Papers that ‘The dread of being accused of weakness or connivance,’ would pretty much guarantee that future presidents wouldn’t abuse this power. I guess he never foresaw the modern president.” Hahn’s last tidbit silenced the men for the remainder of the car ride.

Pepper stood at the doorway of the restaurant as the car pulled up. He greeted the men one by one with the handshake of a man campaigning for political office himself. Everybody thought the gesture peculiar as they had spent most of the last two months together with the man. Walters was waiting for the men inside when they arrived at the Pearl Street address. As he always did, Hahn noted the music in the Tavern to the team and smiled at the selection of Frank Sinatra’s “My Way” playing in the background. The team believed that after his back to back masterful performances weeks earlier, Walters had the presidency all but sewn up. But things had changed since and Josh Anders was the first to bring up the topic.

“George, and I think I speak for all of us, we’re concerned with the latest polling. Your numbers are slipping with all this cancer talk and nobody is addressing the issue. We need to tell the press something, even a canned response.”

It took a few seconds before the new founders realized that Josh had called the candidate George. At first the men scanned the room to make sure there were no outsiders lingering. Then Murray asked where secret service agent Michelle was, to which Walters curtly responded that she was somewhere else.

The candidate did not seem to notice being called by his real name, nor did he acknowledge Anders’ concern. He elaborated on their fantastic journey which brought them to this point. He said almost apologetically that it would soon be ending and, if all went as expected on Tuesday, the team would be faced with the daunting task of governing a nation.  Walters then waved his hand and stated that the presidency was a subject for tomorrow. It might have been a party to the boss, but the new founders all sensed there was more to this dinner than celebration. Walters toasted the team by thanking them for their first class work. Faulk whispered to Steve Anders that the big guy looked as if he had had a few drinks before their arrival. Murray overhead the line and seconded it.

While still holding his wine glass in the air, Walters told of his connection to the old restaurant, telling everybody what Hahn had said less than an hour earlier, that on December 4, 1783, he bid emotional goodbyes to his officers after the Revolutionary War. He waved his hand back and forth, noting that they stood in the very room where the goodbye took place.  Walters explained that each Revolutionary officer had taken a glass of wine and came forward in tears to take his hand. This act of respect was followed by an escort of the General to a boat that took him across the Hudson and on toward his retirement in Mount Vernon. The new founders were emotional as they listened to their leader’s voice crack as he described the glory and sadness of a past life with those he loved but had been gone for hundreds of years. Walters was the most celebrated man in the country again, yet he was alone. He spoke from the heart. “My dear friends, those men of 1783 were very special to me, some of the bravest and most honorable men this country has ever seen. I had a world of respect for those men and yet I would take every single one of you over them, one hundred times out of one hundred. There is no doubt about that.”

The seriousness of the moment was interrupted by the ringtone of Jack Murray’s cell phone. The Virginian excused himself to take the call from his semi-estranged wife. Walters continued to describe his trip back to Virginia following his farewell. He lightened the conversation by joking that he wished he had a private jet and pretty stewardess for the trip instead of a bumpy carriage that took a week to get to its destination. As the men laughed, Murray reentered the room. He looked dejected.

Walters was comfortable enough to ask the question in front of the team. Everybody knew and felt what Murray was going through. They were sympathetic.

“Yeah, everything’s good. Todd came out of his coma this afternoon. He’s responding well but doesn’t remember the accident, which may be a good thing.”

The men thought that news would have brought elation from their compatriot and were puzzled by his reaction. Walters thought the same thing, but turned his attention back to his speech. The first president, in barely a whisper, thanked the new founders.

“Gentlemen, in but three days when the election concludes, we will have achieved Providence’s calling. You have all done very well. I thank you and our nation thanks you.”

Walters sounded sanguine as he concluded. “I will now take my leave for Virginia as we did in another lifetime.”

Murray’s attention was fully back in the room. He had been suspicious of Walters’ intentions since his first appearance on the Fredericks’ show and leaned in to grab Walters’ arm. “What do you mean, sir?”

The General patted Murray’s hand as he scanned the room. “While the other men continue the last few days of the campaign with Mr. Rader, I will ask you and Mr. Hahn to deliver me to my adopted home of Arnold, Maryland. I need to speak with Connor Walters and pay him my respects to his fine father who helped make all of this possible. And lest we forget, I need to cast my vote.”

As the men gathered their collective thoughts, they wondered why Hahn and Murray were chosen to go ahead. Before anybody had a chance to ask, their boss added another direction. “We will then travel back to Mount Vernon and visit my beloved home on the Potomac where I will give thanks to Martha.”

The team tried to digest the latest request that sounded like an order. But Walters spoke again, this time sounding again like an eighteenth century man. “I know not what fate has in store for me but when I am gone, as I have nurtured you, so too should you nurture one another.”

Anders had heard enough and jumped in quickly.  “But General, what are you saying? Where are you going? You’ll be President-elect on Tuesday!”

Walters managed a smile and told Anders that he was very much like his forefather and that Ben Franklin described John Adams best as always an honest man, often a wise one, but sometimes wholly out of his senses. “I think we will not want for a qualified president. Do you, Mr. Anders?”

Turning to the team yet again, Walters detailed how Providence had pre-ordained that fact, concluding his thoughts by stating that maybe “Mr. Walters” could relapse and expire from his cancer in the same fashion as the real Mr. Walters had met his fate. “Now, Mr. Murray and Hahn, you will accompany me to Maryland and Virginia. The rest of you gentlemen, I bid a good evening. We will all be together again for our great victory.”

Two secret service agents entered the room as Walters finished. He shook hands with the entire team before departing with Hahn and Murray. The streets were desolate as the three men, accompanied by the agents, entered the limo on the brisk autumn evening. Having departed Fraunces Tavern, the rest of the team stood on the sidewalk and looked at each other, unsure of what had just transpired or what was next. 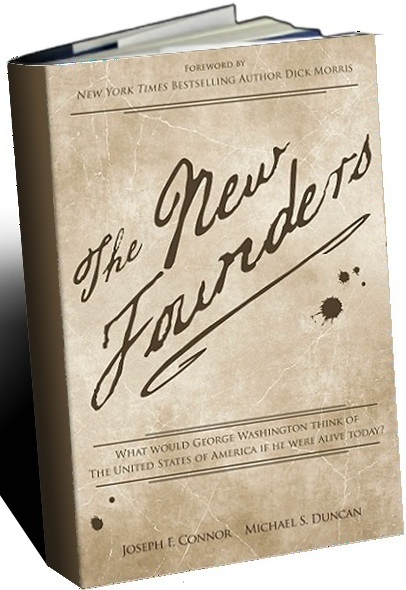